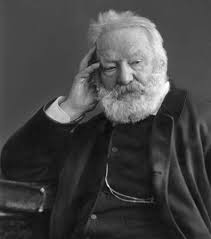 Victor Hugo was a French poet, novelist, and dramatist of the Romantic movement. He is considered one of the greatest and best known French writers.

Victor Marie Hugo was born in Besançon, France, on February 26, 1802. His father was a military officer who later served as a general under Napoleon.

After the separation of his parents, he was raised and educated in Paris by his mother, where the family settled when Hugo was two. From 1815 to 1818 Hugo attended the Lycée Louis-le Grand in Paris. He began in early adolescence to write verse tragedies and poetry, and translated Virgil. Hugo’s first collection of poems, Odes Et Poesies Diverses gained him a royal pension from Louis XVIII. As a novelist Hugo made his debut with Han D’Islande (1823) followed by Bug-Jargal (1826). In 1822 Hugo married Adèle Foucher who was the daughter of an officer at the ministry of war.

Hugo gained wider fame with his play Hernani (1830) and with his famous historical work The Hunchback of Notre Dame(1831) which became an instant success. Since its appearance in 1831 the story has became part of popular culture. The novel, set in 15th century Paris, tells a moving story of a gypsy girl Esmeralda and the deformed bell ringer, Quasimodo, who loves her.

In the 1830s Hugo published several volumes of lyric poetry, Hugo’s lyrical style was rich, intense and full of powerful sounds and rhythms, and although it followed the bourgeois popular taste of the period it also had bitter personal tones. Among his most ambitious works was an epic poem, “Et nox facta est,” (“And There Was Night”), a study of Satan’s fall. The poem was never completed.

In his later life Hugo became involved in politics as a supporter of the republican form of government. After three unsuccessful attempts, Hugo was elected in 1841 to the Académie Francaise. This triumph was shadowed by the death of Hugo’s daughter Léopoldine in 1843. It was only after a decade that Hugo again published books. He devoted himself to politics, advocating social justice. After the 1848 revolution, with the formation of the Second Republic, Hugo was elected to the Constitutional Assembly and to the Legislative Assembly.

When the coup d’état by Louis Napoleon (Napoleon III) took place in 1851, Hugo believed his life to be in danger. He fled to Brussels and then to Jersey and Guernsey in the English Channel. Hugo’s partly voluntary exile lasted 20 years. During this time he wrote at Hauteville House some his best works, including Les Chatimets (1853) and Les Misérables (1862), an epic story about social injustice.

The political upheaval in France and the proclamation of the Third Republic made Hugo return to France. During the period of the Paris Commune, Hugo lived in Brussels, from where he was expelled for sheltering defeated revolutionaries. After a short time of living as a refuge in Luxemburg, he returned to Paris and was elected senator.

Victor Hugo’s death from pneumonia on 22 May 1885, at the age of 83. He was given a national funeral, attended by two million people, and buried in the Panthéon.

Victor Hugo became involve with his childhood friend Adèle Foucher and despite fierce resistance from his mother, continued the relationship covertly. After Sophie’s death in 1821, Hugo married Foucher in 1822. In 1823, their first child Leopold was born, but failed to survive into adulthood. Hugo’s other surviving children were Léopoldine (28 August 1824), Charles (4 November 1826), François-Victor (28 October 1828) and Adèle (24 August 1830). His wife Adèle died in 1868.