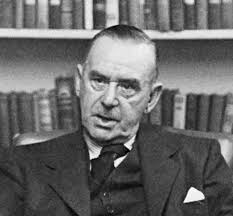 Mann’s father died in 1891 and his trading firm was liquidated. The family subsequently moved to Munich. Mann attended the science division of a Lübeck Gymnasium (school), then spent time at the Ludwig Maximillians University of Munich and Technical University of Munich where, in preparation for a journalism career, he studied history, economics, art history and literature.

Mann lived in Munich from 1891 until 1933, with the exception of a year in Palestrina, Italy, with his novelist elder brother Heinrich. Thomas worked with the South German Fire Insurance Company in 1894-95. His career as a writer began when he wrote for Simplicissimus. Mann’s first short story, “Little Mr Friedemann” (Der Kleine Herr Friedemann), was published in 1898.

Mann moved to Italy in 1896 with his brother, Heinrich, to begin work on his first novel, Buddenbrooks.

The 1900 publication of Buddenbrooks, which traced the lives of a merchant family through several generations, made Mann rich and famous almost overnight. His only stab at drama, a 1905 prose piece called Fiorenza, met with less success. However, Mann cemented his reputation as a great writer with the publication of a number of short works, including Tod in Venedig (Death in Venice) in 1912. The novella describes the breakdown of an illustrious writer who travels to Venice and falls in love with a young Polish boy. The work was at least partially based on Mann’s own experience, and much of his future work focused on the proximity between genius and madness and on the pull of homoeroticism.

Mann struggled with his homosexual tendencies in his literature and throughout his life, but married Katia Pringsheim, the daughter of a Jewish professor, in 1905. The author was deeply ambivalent about the typical bourgeois lifestyle he chose, but stayed with the decision to remain in a heterosexual marriage. With his wife, he had six children, three boys and three girls.

Mann continued to produce works of fiction, including the uncharacteristically satiric novel Royal Highness in 1916 and a shorter work titled Early Sorrow in 1929. In 1924, Mann finally published what many consider to be his greatest work, The Magic Mountain. The novel is set in a tuberculosis sanatorium in the Swiss Alps, a community that represents a microcosm of Europe directly before World War I. The protagonist, a healthy young man, comes to the sanatorium for a short visit, but ends up staying for seven years. Eventually, he finds fulfillment by leaving the community. The novel typifies the style that Mann is best known for: ironical, somber, and symbolic. Mann won the Nobel Prize for this novel, and for Royal Highness.

Between 1933 and 1943, Mann published a tetrology titled Joseph and his Brothers, on the history of the biblical character. In his famous Doctor Faustus (1947), Mann retold the famous myth as a composer who sells his soul to the devil in return for fame. Based on his friend, composer Arnold Schoenberg, the work expresses Mann’s despair over German Nazism. Mann’s last novels include The Holy Sinner (1951), Confessions of Felix Krull, and Confidence Man (1954).

Although Mann was not a political writer, he was forced to move on a number of occasions for political reasons. At the beginning of World War I, Mann conservatively believed in monarchy and German hegemony, but towards the end he was more inclined to side with France and the ideals of democracy. Mann left Hitler’s Germany in 1933 and lived in France and Switzerland before settling in the United States in 1938. He taught at Princeton University in New Jersey for two years, but moved to Pacific Palisades, California to join an expatriate community of German intelligentsia including the composer Arnold Schoenberg, dramatist Berthold Brecht, and Mann’s own brother, Heinrich. After World War II, during the McCarthy era, Mann grew disillusioned with American politics and moved back to Europe in 1952. He died in Zurich on August 12, 1955