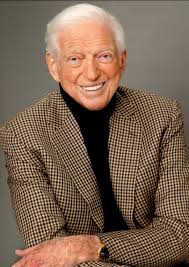 Sidney Sheldon was an American writer. His TV works spanned a 20-year period, but he became most famous after he turned 50 and began writing best-selling novels, such as Master of the Game, The Other Side of Midnight and Rage of Angels. He is the seventh best selling fiction writer of all time.

Sidney Sheldon was born on February 11, 1917, in Chicago, Illinois.

His father Ascher “Otto” Schechtel, was a jewelry store manager and his mother was Natalie Marcus. When Sidney was ten, he sold his poem for ten dollars making it his very first sale. He went to the Denver East High School and for graduate studies he attended the Northwestern University. There he made contributions to the drama groups with his short plays.

In the beginning of 1937 Sheldon tried his fate in Hollywood by writing and reviewing various scripts. He finally managed to sell one of his screenplays ‘South of Panama’ to a studio for 250 dollars in 1941. During the World War I he was recruited as a pilot in the Army Air Corps. After the end of the War he returned to New York where his reputation as a creative writer started building up. He wrote musicals for the well known MGM Studios and Paramount Pictures. Once he had three of his musicals at once on Broadway. They were ‘The Merry Widow’, ‘Jackpot’ and ‘Dream with Music’. This success brought him back to Hollywood. The first film written by Sheldon was ‘The Bachelor and the Bobby-Soxer’ which got him the Academy Award in 1947.

With the rise of television as a popular medium, Sheldon decided to try out his luck in it. He wrote a series called ‘The Patty Duke Show’ and for the next seven years wrote every episode of it. He also made, produced and wrote the show ‘I Dream of Jeannie’ using three pseudonyms ‘Mark Rowane’, ‘Allan Devon’ and ‘Christopher Gollato’. These were also used when writing ‘Nancy’ and ‘Hart to Hart’.

His first novel was ‘The Naked Face’ which was published in 1969, earning him a nomination for ‘The Best First Writer’ category. The second novel ‘The Other side Of Midnight’ was published in 1973, topping ‘The New York Times Best Seller’ list. Sheldon was very particular about the writing and validity of his books. For this very reason before writing his novel ‘Windmills of the Mind’ which was a story about the CIA, he personally met Richard Helms who was a former CIA recruit. He also went to Argentina and Romania, and spent some time in ‘Junction City, Kansas’ where one of the lead characters of the book resided. He said during an interview in 1987:

His marriage to Jorja Curtright Sheldon, an actress and interior designer, lasted for thirty years. After her death in 1985, Sheldon married Alexandra Kostoff in 1989. Sidney Sheldon died due to Pneumonia in California on 30th January, 2007. He was buried in Westwood Village Memorial Park Cemetery.

His legacy includes 18 novels which have sold three hundred million copies, 200 TV scripts and 25 major films along with 6 Broadway plays.