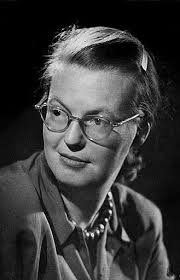 Shirley Jackson was an American author. She was a popular writer in her time, and her work has received increased attention from literary critics in recent years. She is best known for the short story “The Lottery”

Shirley Hardie Jackson was born on December 14, 1916, in San Francisco, California, and grew up nearby in Burlingame.

The family relocated to Rochester, New York, where Shirley attended Brighton High School and received her diploma in 1934. For college, she first attended the University of Rochester, before earning a BA degree from Syracuse University in 1940.

She attended the University of Rochester and then Syracuse University, where she became fiction editor of the campus humor magazine.

After graduating in 1940, Jackson moved to New York City. She began to write professionally, her works appearing in such publications as The New Yorker, Redbook, The Saturday Evening Post and The Ladies’ Home Journal. Her first novel, The Road Through The Wall, was published in 1948.

Also in 1948, The New Yorker published Jackson’s short story, “The Lottery.” The tale, which starts as a seemingly benign account of an annual event in smalltown America, takes a dark turn when the event is revealed to be a gruesome sacrifice. “The Lottery” generated the most mail in the history ofThe New Yorker, with many readers expressing confusion about underlying meanings and anger over its disturbing ending.

Despite the backlash, “The Lottery” became one of the most significant short stories of its era. It was eventually translated into dozens of languages, and adapted for radio, television and the stage.

Jackson also wrote novels like The Haunting of Hill House and We Have Always Lived in the Castle as well as the witty, embellished memoir Life Among the Savages, about her domestic experiences. Often relying on supernatural themes, she was known for tackling provocative, chilling subject matter that was culturally incisive and held metaphors for how people dealt with differences. She was married to critic Stanley Edgar Hyman, with the couple having four children.

In 1965, Jackson died of heart failure in her sleep, at her home in North Bennington, at the age of 48. At the time of her death, she was overweight and a heavy smoker who had suffered throughout her life from various neuroses and psychosomatic illnesses. After her death, her husband released a posthumous volume of her work, Come Along With Me, containing several chapters of her unfinished last novel as well as several rare short stories (among them “Louisa, Please Come Home”) and three speeches given by Jackson in her writing seminars