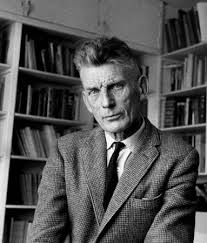 Samuel Beckett was an Irish avant-garde novelist, playwright, theatre director, and poet, who lived in Paris for most of his adult life and wrote in both English and French. His work offers a bleak,tragicomic outlook on human existence, often coupled with black comedy and gallows humour.

Samuel Barclay Beckett was born on April 13, 1906, in Dublin, Ireland. Beckett was the younger of two sons. His father was a civil engineer and mother was a housewife. They were member of the Church of Ireland. Beckett went to Trinity College and studied English, Italian and French from 1923 to 1927. He got his Bachelor’s degree from there and taught at the Campbell College in Belfast after which he started teaching in Paris at the ‘École Normale Supérieure’ as a lecturer.

While Beckett was in Paris he met James Joyce, the author of the highly criticized novel ‘Ullyses’, through another close friend of his. Beckett developed profoundness for Joyce who would have a great effect on Beckett’s life to come. He joined the same literary circle as Joyce inspiring him to write his first work which was a critical essay ‘Dante… Bruno. Vico.. Joyce’. Secondly Joyce’s daughter made advances towards Beckett which he declined on the grounds that she was schizophrenic.

The first short story by Beckett was ‘Assumption’. Beckett won a small prize for his poem ‘Whoroscope’ which was about the biography of René Descartes. He returned to Ireland for a brief time period where he taught at the Trinity College but resigned after only four terms had passed. He started traveling throughout Europe but finally settled in Paris in 1937. During his travels he did not stop writing. He published his novel ‘Proust’ in 1931 while in England. Following this was his first novel ‘Dream of Fair to Middling Women’ which was published finally after many rejections in 1993. This novel laid the base for many of Becketts works including his collection of short stories ‘More Pricks than Kicks’.

‘Recent Irish Poetry’ and ‘Humanistic Quietism’ were two of the essays reviewed and published by Beckett. In 1935 Becketts poetic skills were seen and read by the public in his book of poetry ‘Echo’s Bones and Other Precipitates’. In 1938 Beckett was stabbed in the chest, the knife barely missing his heart but still doing severe damage. He was rushed to the hospital where when he woke up saw his friend James Joyce by his side. During his stay at the hospital, Beckett grew close to one of his old acquaintances, a French woman named ‘Suzanne Descheveaux-Dumesnil’ who he married in 1961 in England.

1941 was a sad year for Beckett. The death of James Joyce and the invasion of the Nazis brought great grief to his heart. During 1946 to 1950, Beckett underwent a change in his ideas and even his writings. He wrote mainly in the French language and translated the books himself in English. His books ‘Molloy’ (1951), ‘Malone Dies’ (1951), and ‘The Unnamable’ (1953), written with brilliance and a remarkable pace, were the greatest prose writings of the time. They show a very bleak but incredibly oblique and strenuous course of the human life. Beckett’s play ‘Waiting for Godot’ became the reason for the rise in his fame. ‘Endgame’ (1958), ‘Happy Days’ (1961) and ‘Play’ (1963) were some of the other plays written by him.

Samuel Beckett continued to write throughout the 1970s and 80s mostly in a small house outside Paris. There he could give total dedication to his art evading publicity. In 1969, he was awarded the Nobel Prize for Literature, though he declined accepting it personally to avoid making a speech at the ceremonies. However, he should not be considered a recluse. He often times met with other artists, scholars and admirers to talk about his work.

By the late 1980s, Samuel Beckett was in failing health and had moved to a small nursing home. Suzanne, his wife, had died in July 1989. His life was confined to a small room where he would receive visitors and write. He died on December 22, 1989, in a hospital of respiratory problems just months after his wife.