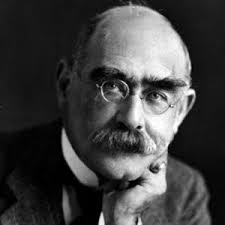 Rudyard Kipling was an English short-story writer, poet, and novelist. He wrote tales and poems of British soldiers in India and stories for children.

Joseph Rudyard Kipling was born on 30 December 1865 in Bombay, British India. His father Lockwood Kipling was a sculptor and the head of department of the architectural sculpture at the Sir Jamsetjee Jeejeebhoy School of Art and Industry in Bombay. Rudyard’s mother Alice Kipling was a lively and cheerful woman. After spending some fabulous years in India, a six year old Kipling was sent to England where they lived with a couple Mr. and Mrs. Holloway as then was the custom for the British nationalists living in India. He was accompanied by his three year old sister Alice.

Those years under the bullying and maltreatment of Mrs. Holloway, were of humiliation, torture and obloquy as he sardonically recalls in his autobiography. However, they received the due love and affection at their maternal Aunt Georgia’s home that was denied at Holloway’s. The bad days came to an end in 1877, when Alice Kipling returned to England and took them away with her. The next year in 1878, Rudyard was sent to study at the United Service College at Westward Ho in Devon. Due to the financial difficulties of his parents, Rudyard abandoned his dream to study at Oxford and took up a job in Lahore-then a part of India- of an assistant editor in a local newspaper the Civil & Military Gazette.

While in Lahore, Kipling wrote over thirty stories for The Gazette beginning from the year 1886. In 1888, his first prose collection Plain Tales from the Hills was published in Calcutta. In 1887, Kipling became a part of a much renowned newspaper The Pioneer, Allahabad. Whilst working with the paper, Rudyard kept on writing and published six volumes of short stories including In Black and White, Soldiers Three and The Phantom Rickshaw. In 1889, he left the newspaper in response to a fall out with the authorities. He decided to move on to London to make his entry in the literary world there. He left India on 8 March 1889.
Several significant things happened in the next two years of his life, he wrote his first novel, The Light That Failed in 1891, and also met an American author and publishing agent, Wolcott Ballisterwith whom he worked together on a novel, The Naulahka. In the mean time, he also suffered from a nervous breakdown. Due to his continuously deteriorating health, his doctors advised him for a sea voyage, which he eventually embarked on in 1891 with an intention of visiting South Africa, Australia, New Zealand and India once again.However, his plans were cut short on account of the sudden demise of Wolcott Balestier from typhoid fever, and he immediately decided to return to London. Meanwhile, he wrote a collection of short stories about the British India called Life’s Handicap which was published in 1891 in London.

Before returning to London, he sent a telegram to propose to Wolcott’s sister Caroline (also called Carrie), with whom he had been apparently involved in sporadic romance. On 18 January 1892, Carrie and Rudyard were married in London, The ceremony was held at All Souls Church, Langham Place.
The Kipling couple move to the United States where their first daughter Josephine was born on 29 December 1892. It was after her birth, that he started writing the ‘Mowgli stories’ which later became known as The Jungle Book and with in the next few years, Rudyard had written a volume of short stories, a novel Captain Courageous and a several number of poetries together with The Seven seas.
In 1896, couple’s second daughter Elsie was born. After the British-American crisis broke out in 1895, the couple decided to move out of America where they underwent a series of embitter behavior from the natives. The couple left America for good in 1896.
Back in England, Kipling began to work more actively and fiercely. Recessional and The White Man’s Burden his two poems were published in 1897 and 1899 respectively and gave rise to huge controversies that will last for long. In 1897, the couple was overjoyed when their first and only son John Kipling was born in the month of August. However, a tragedy befell the family when their elder daughter died of pneumonia in 1899.

The Road to Success

In 1902, Kipling published another story Just So Stories for Little Children which would become one of his most acclaimed works following the success of Kim. He further wrote two science fictions With the Night Mail and As Easy as A.B.C. which made into print in 1905 and 1912 respectively.
The most active phase of his life was the first decade of   20th century, when he was at the peak of his creative best. For him, 1907 brought along with it the greatest honor of the time, the Noble Prize for Literature. At the award function in Stockholm on 10 December 1907, Kipling became the first English language recipient of this great honor.
After this great accomplishment, came two great poetry and story compendiums: Puck of Pook’s hill and Reward and Fairies which were published in 1906 and 1910 respectively. The latter contained one of the most favorite poems of all times in English literature called “If…” This marvelous poem inciting readers for self-command and phlegm became Kipling’s one of the most famous poetry creation of all the times.
Kipling always remained politically expressive with his creations. He commiserated with the anti-Home Rule stand of the Irish Unionist .He also stroked chords of intellectuality with the Dublin-born leader Edward Carson who raised a potent voice against “Rome Rule” and also publicized his staunch opinion through his creations. Kipling also projected himself as a strong opponent of the Principles of Democratic centralism and Quasi-military discipline through his creations.
Despite his intellectual asset and enormous popularity, he was never made Poet Laureate. Different people quote different reasons behind it, some are of the view that he himself turned down the offer while others are of the opinion that Queen Victoria didn’t approve of him. However, this never came as a hurdle in Kipling’s literary career, he is still regarded as the best author and poet, English Language could ever get.

Tragedy once again hit the family when his only son John Kipling died in 1915 at the ‘battle of Loos’. The untimely death of his son made Rudyard blame himself for his role in getting John in the Army at an early age of 17. The incident made him write a poem “My Boy Jack” in which he deeply mourns for his son cursing and blaming himself.

In year 1922, Kipling was elected the Lord Rector of St Andrews University in Scotland and remained on the position till 1925. Towards the end of his life, Kipling chose to take a backseat with his writing career, though he did not completely abandon it, the output was lesser. He died of a hemorrhage on 18 January 1936 and was cremated at Golden Green Crematorium