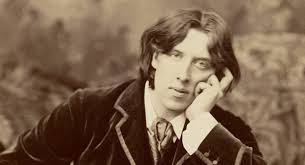 Oscar Wilde was an Irish author, playwright and poet. After writing in different forms throughout the 1880s, he became one of London’s most popular playwrights in the early 1890s.

Oscar Fingal O’Flahertie Wills Wilde was born in Dublin on 16 October 1854 to Sir William Wilde and his wife Jane. Oscar’s mother, Lady Jane Francesca Wilde (1820-1896), was a successful poet and journalist. She wrote patriotic Irish verse under the pseudonym “Speranza”. Oscar’s father, Sir William Wilde (1815 – 1876), was a leading ear and eye surgeon, a renowned philanthropist and gifted writer, who wrote books on archaeology and folklore. Oscar had an elder brother, Willie, and a younger sister, Isola Francesca, who died at the early age of 10.

He was educated at Portora Royal School (1864-71), Trinity College, Dublin (1871-74), and Magdalen College, Oxford (1874-78). While at Oxford, he became involved in the aesthetic movement and became an advocate for ‘Art for Art’s Sake’ (L’art pour l’art). Whilst at Magdalen, he won the 1878 Newdigate Prize for his poem Ravenna.

In 1888, he published The Happy Prince and Other Tales, fairy-stories written for his two sons. His first and only novel, The Picture of Dorian Gray, was published in 1891 and received quite a negative response. This had much to do with the novel’s homoerotic overtones, which caused something of a sensation amongst Victorian critics. In 1891, Wilde began an affair with Lord Alfred Douglas, nicknamed ‘Bosie’, who became both the love of his life and his downfall. Wilde’s marriage ended in 1893.

Wilde’s greatest talent was for writing plays. His first successful play, Lady Windermere’s Fan, opened in February 1892. He produced a string of extremely popular comedies including A Woman of No Importance (1893), An Ideal Husband (1895), and The Importance of Being Earnest(1895). These plays were all highly acclaimed and firmly established Oscar as a playwright.

In April 1895, Oscar sued Bosie’s father for libel as the Marquis of Queensberry had accused him of homosexuality. Oscar’s case was unsuccessful and he was himself arrested and tried for gross indecency. He was sentenced to two years of hard labor for the crime of sodomy. During his time in prison he wrote De Profundis, a dramatic monologue and autobiography, which was addressed to Bosie.

Upon his release in 1897, he wrote The Ballad of Reading Gaol, revealing his concern for inhumane prison conditions. He spent the rest of his life wandering Europe, staying with friends and living in cheap hotels. He died of cerebral meningitis on November 30, 1900, penniless, in a cheap Paris hotel.