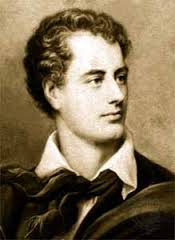 Lord Byron was an English poet and a leading figure in the Romantic movement. Among Byron’s best-known works are the lengthy narrative poems Don Juan and Childe Harold’s Pilgrimage and the short lyric She Walks in Beauty.

George Gordon Noel Byron (later Noel), sixth Baron Byron, was born on 22 January 1788 in London. His father died when he was three, with the result that he inherited his title from his great uncle in 1798.

Byron spent his early years in Aberdeen, and was educated at Harrow School and Cambridge University. In 1809, he left for a two-year tour of a number of Mediterranean countries. He returned to England in 1811, and in 1812 the first two cantos of ‘Childe Harold’s Pilgrimage’ were published. Byron became famous overnight.

In 1814, Byron’s half-sister Augusta gave birth to a daughter, almost certainly Byron’s. The following year Byron married Annabella Milbanke, with whom he had a daughter, his only legitimate child. The couple separated in 1816.

Facing mounting pressure as a result of his failed marriage, scandalous affairs and huge debts, Byron left England in April 1816 and never returned. He spent the summer of 1816 at Lake Geneva with Percy Bysshe Shelley, his wife Mary and Mary’s half sister Claire Clairmont, with whom Byron had a daughter.

Byron travelled on to Italy, where he was to live for more than six years. In 1819, while staying in Venice, he began an affair with Teresa Guiccioli, the wife of an Italian nobleman. It was in this period that Byron wrote some of his most famous works, including ‘Don Juan’ (1819-1824).

In July 1823, Byron left Italy to join the Greek insurgents who were fighting a war of independence against the Ottoman Empire. On 19 April 1824 he died from fever at Missolonghi, in modern day Greece. His death was mourned throughout Britain. His body was brought back to England and buried at his ancestral home in Nottinghamshire.