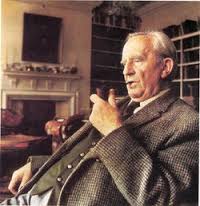 Tolkien was an English writer, poet, philologist, and university professor who is best known as the author of the classic high-fantasy works The Hobbit, The Lord of the Rings, andThe Silmarillion.

John Ronald Reuel Tolkien was born in Bloemfontein, South Africa, on January 3, 1892, to Arthur Tolkien and Mabel Suffield Tolkien. After Arthur Tolkien died from peritonitis, Mabel settled with 4-year-old J.R.R. (then called Ronald) and his younger brother, Hilary, in the country hamlet of Sarehole, in Birmingham, England.

Mabel Tolkien died in 1904, and the Tolkien brothers were sent to live with a relative and in boarding homes, with a Catholic priest assuming guardianship in Birmingham. J.R.R. went on to get his first-class degree at Exeter College, specializing in Anglo-Saxon and Germanic languages and classic literature. He enlisted as a lieutenant in the Lancashire Fusiliers and served in World War I, making sure to continue writing as well. He fought in the Battle of the Somme, in which there were severe casualties, and was eventually released from duty due to illness. In the midst of his military service, he’d married Edith Bratt in 1916.

Career as a Scholar and Writer

Continuing his linguistic studies, Tolkien joined the faculty of the University of Leeds in 1920 and a few years later became a professor at Oxford University. While there he started a writing group called The Inklings, which counted among its members C.S. Lewis and Owen Barfield. It was also at Oxford, while grading a paper, that he spontaneously wrote a short line about “a hobbit.”

The award-winning fantasy novel The Hobbit—about the small, furry-footed Bilbo Baggins and his adventures—was published in 1937 and was regarded as a children’s book, though Tolkien would state the book wasn’t originally intended for children. He also created more than 100 drawings to support the narrative.

Over the years, while working on scholarly publications, Tolkien developed the work that would come to be regarded as his masterpiece—the Lord of the Rings series, partially inspired by ancient European myths, with its own sets of maps, lore and languages.

Tolkien released part one of the series, The Fellowship of the Ring, in 1954;The Two Towers and The Return of the King followed in 1955, finishing up the trilogy. The books gave readers a rich literary trove populated by elves, goblins, talking trees and all manner of fantastic creatures, including characters like the wizard Gandalf and the dwarf Gimli.

While Rings had its share of critics, many reviewers and waves upon waves of general readers took to Tolkien’s world, causing the books to become global best sellers, with fans forming Tolkien clubs and learning his fictional languages.

Tolkien retired from professorial duties in 1959, going on to publish an essay and poetry collection, Tree and Leaf, and the fantasy tale Smith of Wootton Major. His wife Edith died in 1971, and Tolkien died on September 2, 1973, at the age of 81. He was survived by four children.