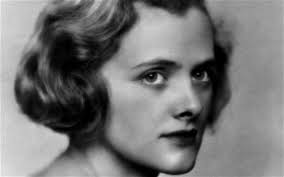 Daphne du Maurier was a British author and playwright. Many of her works have been adapted into films, including the novels Rebecca and Jamaica Inn, and the short stories The Birds and Don’t Look Now. The first three film adaptations were directed by Alfred Hitchcock and the last by Nicolas Roeg.

Daphne Du Maurier also known as ‘Lady Browning’ was a British writer and playwright born on 13th May 1907 in London.

The du Mauriers were a privileged and prosperous family. Her father was a well-known actor and theater manager. Her mother was an actress

Du Maurier was privately educated at home by governesses. At the age of 18, she completed her first work, a collection of 15 short stories entitled The Seekers.

In early 1925, just before her eighteenth birthday, du Maurier left England to attend finishing school at Camposena, a village near Meudon, outside of Paris, France.

In 1926, the du Mauriers purchased a vacation home called Ferryside in the town of Fowey, a harbor town on the rocky southwestern coast of Cornwall, England.

Daphne published her first short story in 1928; her first novel, “The Loving Spirit”, was published in 1931, and her last, “Rule Britannia”, forty-one year later. In between, she achieved her greatest success with the novel Ребекка (1940), which was adapted by Alfred Hitchcock into a classic film that won the Best Picture Oscar for 1940. Another novel, А теперь не смотри (1973), adapted by Nicolas Roeg, is also considered a classic film in Britain.

Along with “Rebecca”, she had great successes with her novels Таверна Ямайка (1939) and Frenchman’s Creek (1944), both of which were adapted into movies. The three novels were set in Cornwall, where she lived. In addition to multiple non-fiction books, Daphne Du Maurier also wrote three plays (including an adaptation of “Rebecca”).

Du Maurier died on 19 April 1989, aged 81, at her home in Cornwall, which had been the setting for many of her books.