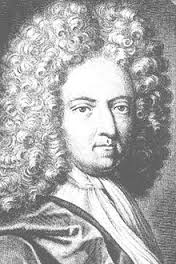 Daniel Defoe  was born about 1660 in London to a poor, but hard-working butcher who was, in addition, a Dissenter from the Church of England. Because his father was a Dissenter, Daniel was unable to attend such traditional and prestigious schools as Oxford and Cambridge; instead, he had to attend a Dissenting academy, where he studied science and the humanities, preparing to become a Presbyterian minister. It was not long, however, before he decided against the ministry. Living for the rest of his life in the strict confines of a parish seemed stifling. Daniel recognized his independent, ambitious nature and wanted to be a part of the rapidly growing business world of London. So, after a short apprenticeship, he decided to set up his own haberdashery shop in a fashionable section of London.

Not only did Defoe prove that he had a flair for business, but he also tried his talents in yet another field: politics. England, in 1685, was ruled by James Stuart, a Catholic, who was strongly anti-Protestant. Defoe was a staunch believer in religious freedom and, during the next three years, he published several pamphlets protesting against the king’s policies. This in itself was risky, but Defoe was never a man to be stopped when he felt strongly about an issue. Shortly thereafter, James Stuart was deposed, and Defoe held several part-time advisory positions under the new king.

In 1662, the economic boom that had created many rich men and increased employment suddenly collapsed. Foreign trade came to a sudden halt when war was declared with France. Among the many men whose fortunes disappeared was Daniel Defoe. Then, after several years of trying to pay off his debts, Defoe suffered another setback: King William died, and Defoe, still a fierce Dissenter, found himself persecuted once again. And, after he published a particularly sharp political satire, he found himself quartered in Newgate Prison for three months. He was finally released, but he had yet another ordeal to endure; he was fastened in a public pillory for three days.

When Defoe returned home, he found a failing business and a family wracked by poverty. His money gone, his family destitute, and his own health deteriorated, it is little wonder that Defoe compromised his principles and pledged to support his foremost adversary, Queen Anne.

Newly sworn to the Tory party, Defoe was soon writing again. Ironically, he began publishing a newspaper that was used for propaganda purposes by one of Queen Anne’s chief politicians, a man who had been instrumental in Defoe’s imprisonment. But Defoe could not silence his true political feelings and, several years later, he published several pamphlets and spent several more months in Newgate Prison. A year later, Defoe was arrested because of another political writing, but this time he avoided Newgate.

Defoe then tried a new tactic: He began secretly writing for his own party’s journal, while publishing essays for the Tory journal.

In 1719, Defoe finished and published Robinson Crusoe, a long, imaginative literary masterpiece. It was popular with the public and has never lost its appeal to adventure and romance. Other novels soon followed, in addition to his multitude of articles and essays. But debts still plagued Defoe, and he died at 70, hiding in a boarding house, trying to evade a bill collector.