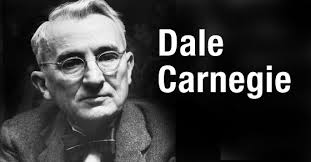 Dale Carnegie was an American writer and lecturer and the developer of famous courses in self-improvement, salesmanship, corporate training, public speaking, and interpersonal skills.

Dale Harbison Carnegie was born November 24, 1888, Maryville, Missouri.  His parents were impoverished farmers and as a young boy he had to get up at 4 A. M. every day to milk the cows and help on the farm, then to go to school. He managed to get through school and graduated from the State Teacher’s College in Warrensburg, Missouri.

Dale Carnagey’s first job was selling correspondence learning courses to farmers. Then he worked as a salesman for Armour & Company, the largest slaughterhouse and meatpacking company in Chicago. He was selling their meats, soap, lard, and other byproducts. Armour & Company was notorious for low compensation and also for banning unionization. Carnagey was the most successful salesman in Omaha, and made his sales territory the national leader of the company.

In 1911 he quit the job as a salesman in order to pursue a lifelong dream to become a lecturer with then popular adult education courses in Chautauqua, near Jamestown, New York. However, he ended up instead attending the American Academy of Dramatic Arts in New York City, then he tried acting with a touring troupe, but the production where he played a role soon ended. He returned to New York, unemployed and nearly broke, and was living at the YMCA on the 125 Street. There he tried writing but without any success.

In 1912 Dale Carnagey persuaded the YMCA hostel manager to allow him to teach a class on public speaking. He got himself a classroom in return for 80% of the net proceeds. Carnagey was improvising from his first session, and as he run out of material, he suggested that students speak about “something that made them angry.” Carnagey noticed that the technique made his students unafraid to speak before an audience. Although the same technique was known since ancient philosophical schools, and has been widely used in group therapy, albeit Dale Carnagey developed his own approach. He quickly became a successful teacher capitalizing on the average American’s desire to have more self-confidence.

In 1913 Dale Carnagey published his first bestselling book: “Public Speaking and Influencing Men in Business” (1913-1932 with updates and revisions). In 1914 he was earning 500 dollars a week, which at that time was the price of a new Ford Model T. In 1916 Dale Carnagey was able to rent the New York’s main venue, the Carnegie Hall, and his lectures were sold out. In 1919 he changed the spelling of his name from Carnagey to Carnegie. In 1926 he published the first collection of his writings titled “Public Speaking: a practical Course for Business Men.” The book became a bestseller, and the author became rich. However, he lost all his savings in the stock market crash of 1929.

Dale Carnegie learned to accept the worst that can happen, then proceed to improve on the worst. His own experience was the source for his bestselling books: “Public Speaking and Influencing Men in Business” and “How to Win Friends and Influence People” (1936). The latter book had 17 printings in the first year. He also wrote “Lincoln the Unknown,” a biography of president Abraham Lincoln. Carnegie developed famous courses on self-improvement, salesmanship, and corporate training programs, as well, as programs for improvement in public speaking skills and interpersonal skills.

Dale Carnegie died at age 66, of a Hodgkin’s lymphoma, complicated with uremia, on November 1, 1955, in Forest Hills, New York. He was laid to rest in the Belton cemetery, Cass County, Missouri, USA.