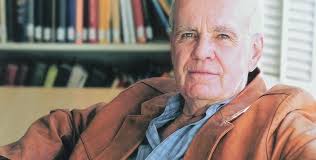 Cormac McCarthy is an American novelist, playwright, and screenwriter. He has written ten novels, spanning the Southern Gothic, western, and post-apocalyptic genres. He won the Pulitzer Prize and the James Tait Black Memorial Prize for Fiction for The Road.

Cormac McCarthy was born in Rhode Island on July 20, 1933. He is the third of six children (the eldest son).

In 1937, his family moved to Knoxville, Tennessee. After graduating from high school, he went to the University of Tennessee but left in 1953 to join the U.S. Air Force, where he served for four years.

McCarthy returned to UT in 1957 and began what would become an illustrious writing career when he published two stories, “A Drowning Incident” and “Wake for Susan,” in the student literary magazine. Also notable of his time at UT, McCarthy won the Ingram-Merrill Award for creative writing in both 1959 and 1960.

The early 1960s found McCarthy in Chicago, working on his first novel and marrying a student he had met while at UT, Lee Holleman. The couple had one son, Cullen, before their marriage came to an end. (McCarthy would marry twice more, to Anne DeLisle in 1966, and to Jennifer Winkler in l998.)

His first book, The Orchard Keeper, was published in 1965 to mixed reviews but garnered McCarthy the William Faulkner Award. McCarthy soon won a traveling fellowship from the American Academy of Arts and Letters and set sail for Europe. He met Anne DeLisle on board the ship, and he and DeLisle traveled the continent for the next couple of years. They returned to Tennessee in 1967, and Outer Dark was published the following year. What followed these two dark and complex novels were two more that lived in the Southern Gothic realm and helped build McCarthy’s reputation as a literary heavyweight: Child of God (1974) and Suttree (1979), which some contend is his greatest work. The novels were about people on the outskirts of society, looking into themselves, working through seemingly endless dark nights of the soul.

In 1985, Blood Meridian, a hyper-violent and apocalyptic frontier tale set in the 1840s, was published to critical acclaim (although little excitement from the general reading public) and has since been hailed as his masterpiece. Telling the story of a 14-year-old boy, the Kid, who joins a gang of Indian hunters along the U.S.–Mexico border, the work allowed McCarthy to explore the nature of good and evil in a way that would redefine his writing and truly tip the scales on his growing status.

In 1992, McCarthy’s All the Pretty Horses was published. This book would be his first real breakthrough to a wide readership, selling nearly 200,000 copies in the first hardcover printing. It also won the National Book Award and paved the way for two more novels in the “Border Trilogy”: The Crossing (1994) and Cities of the Plain (1998).

After the turn of the 21st century, McCarthy began entering the mainstream consciousness even more with such works as No Country for Old Men (2005), which was turned into an Oscar-winning film two years later, and The Road (2006), an end-of-the-world father/son tale that won the Pulitzer Prize that year and also went on to the big screen. In 2013, two more of his works moved toward movie theaters, with James Franco’s adaptation of Child of God and Ridley’s Scott’s The Counselor, for which McCarthy wrote his first original screenplay.

Besides the Pulitzer, McCarthy has won a Rockefeller Foundation grant, a Guggenheim fellowship and a MacArthur Foundation Grant.