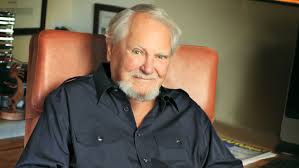 Clive Eric Cussler was born on July 15, 1931 in Aurora, Illinois, and grew up in Alhambra, California. He was awarded the rank of Eagle Scout when he was 14. He attended Pasadena City Collegefor two years and then enlisted in the United States Air Force during the Korean War. During his service in the Air Force, he was promoted to Sergeant and worked as an aircraft mechanic and flight engineer for the Military Air Transport Service (MATS).

Clive Cussler married Barbara Knight in 1955, and they remained married for nearly fifty years until her death in 2003. Together they had three children — Teri, Dirk, andDayna — who have given him four grandchildren.

After his discharge from the military, Cussler went to work in the advertising industry, first as a copywriter and later as a creative director for two of the nation’s most successful advertising agencies. As part of his duties Cussler produced radio and television commercials, many of which won international awards including an award at the Cannes Lions International Advertising Festival.

Following the publication in 1996 of Cussler’s first nonfiction work, The Sea Hunters, he was awarded a Doctor of Letters degree in 1997 by the Board of Governors of the State University of New York Maritime College who accepted the work in lieu of a Ph.D. thesis. This was the first time in the college’s 123-year history that such a degree had been awarded.

In 2002 Cussler was awarded the Naval Heritage Award from the U S Navy Memorial Foundation for his efforts in the area of marine exploration.

Cussler is a fellow of the Explorers Club of New York, the Royal Geographic Society in London, and the American Society of Oceanographers.

Clive Cussler began writing in 1965 when his wife took a job working nights for the local police department where they lived in California. After making dinner for the kids and putting them to bed he had no one to talk to and nothing to do so he decided to start writing. His most famous creation is marine engineer, government agent and adventurerDirk Pitt. The Dirk Pitt novels frequently take on an alternative history perspective, such as “what if Atlantis were real?” or “what if Abraham Lincoln wasn’t assassinated, but was kidnapped?”

Cussler’s novels, like those of Michael Crichton, are examples of techno-thrillers that do not use military plots and settings. Where Crichton strove for scrupulous realism, however, Cussler prefers fantastic spectacles and outlandish plot devices. The Pitt novels, in particular, have the anything-goes quality of the James Bond or Indiana Jonesmovies, while also sometimes borrowing from Alistair MacLean’s novels. Pitt himself is a larger-than-life hero reminiscent of Doc Savage and other characters from pulp magazines.