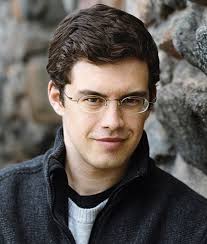 Christopher Paolini is an American author. He is best known as the author of the Inheritance Cycle, which consists of the books Eragon, Eldest, Brisingr and Inheritance.

Christopher James Paolini was born on November 17, 1983 in Southern California and raised in the area of Paradise Valley, Montana. His family members include his parents, Kenneth Paolini and Talita Paolini, and his younger sister, Angela Paolini. Homeschooled for the duration of his education, Paolini graduated from high school at the age of 15 through a set of accredited correspondence courses from the American School of Correspondence in Lansing, Illinois. Following graduation, he started his work on what would become the novel Eragon, the first of a series set in the mythical land of Alagaesia.

In 2002, Eragon was published by Paolini International LLC, Paolini’s parents’ publishing company. To promote the book, Paolini toured over 135 schools and libraries, discussing reading and writing, all the while dressed in “a medieval costume of red shirt, billowy black pants, lace-up boots, and a jaunty black cap.” He drew the cover art for the first edition of Eragon, which featured Saphira’s eye, along with the maps on the inside covers of his books.

In summer 2002, the stepson of author Carl Hiaasen found Eragon in a bookstore and loved it, so Hiaasen brought it to the attention of his publisher, Alfred A. Knopf. Knopf subsequently made an offer to publish Eragon and the rest of the Inheritance cycle. The second edition of Eragon was published by Knopf in August 2003. At the age of nineteen, Paolini became a New York Times bestselling author.

In December 2006, Fox 2000 released the film adaptation of Eragon in theaters around the world.

Paolini’s essay “It All Began with Books” was included in the April 2005 anthology Guys Write for Guys Read.

Eldest, the sequel to Eragon, was released August 23, 2005. The third book in the cycle, Brisingr, was released on September 20, 2008. Although the Inheritance Cycle was planned as a trilogy, a fourth book, Inheritance, was needed to conclude the story.

To date, the Inheritance Cycle has sold more than 35 million copies. On March 23, 2011, Random House announced the cover, title, and release date of Inheritance. It was released on November 8, 2011 in the US, Australia, New Zealand, the EU and India, and was subsequently translated and published in fifty-three countries.

Paolini is currently working on a science fiction novel and plans to return to the world of Alagaësia with a fifth book at some point in the future.

He lives in Paradise Valley, Montana.