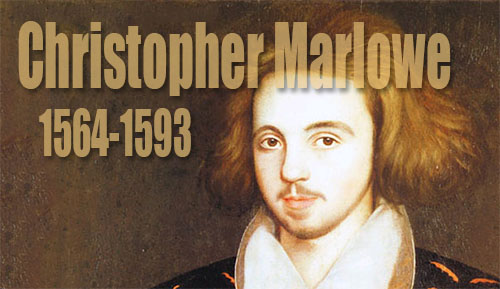 Christopher Marlowe was born in Canterbury Kent on 26 February 1564.

He studied at ‘The King’s School’ and then got a scholarship to ‘Corpus Christi College’, Cambridge. He graduated with Bachelors in Arts in 1584. ‘Dido, Queen of Carthage’ was his first drama. It was acted on by a group of young actors known as ‘Children of the Chapel’ somewhere in between 1587 to 1593 although we know it was published in 1594.

His play ‘Tamburlaine the Great’ was performed on the stage in 1587 in London. This play was among the first of the ‘blank verse’ plays. It became an instant success. This was the only play published during his lifetime whereas all others were published posthumously. ‘The Jew of Malta’ was about a Jewish character who takes revenge on the city establishments. Christopher Marlowe wrote this play in 1589 or 1590 however we know for sure that the play was performed in 1592. It was very successful and remained popular for the next five decades. Its oldest edition to have been survived is one from 1633 even though it was put in the ‘Stationer’s Register’ in 1594. Marlowe’s play titled ‘Edward the Second’ was about King Edward and his removal by the Queen and Barons who disapprove of the extra influence of his favorite people in the court. This play was also put in the Stationer’s Register in 1593 which was almost a month after Marlowe died.

Christopher Marlowe’s work called ‘The Massacre at Paris’ is his shortest work. It shows the events that took place in 1572 on Saint Bartholomew’s Day Massacre. ‘The Tragical History of the Life and Death of Doctor Faustus’ is his fourth play which was based on ‘Faustbuch’ and how a scholar deals with the devil. This play was edited so much that scholars today find it hard to comment on it. There are versions of the play available; one dates back to 1604 known as A Text and the other is from 1616 known as B text. Scholars believe that the A text seems more like the work of Marlowe because of the irregular characters and the particular spellings.

The constant rumors of Christopher Marlowe’s atheism finally caught up with him on Sunday May 20, 1593, and he was arrested for just that “crime.” Atheism, or heresy, was a serious offense, for which the penalty was burning at the stake. Despite the gravity of the charge, however, he was not jailed or tortured but was released on the condition that he report daily to an officer of the court.

On May 30, however, Marlowe was killed by Ingram Frizer. Frizer was with Nicholas Skeres and Robert Poley, and all three men were tied to one or other of the Walsinghams–either Sir Francis Walsingham (the man who evidently recruited Marlowe himself into secret service on behalf of the queen) or a relative also in the spy business. Allegedly, after spending the day together with Marlowe in a lodging house, a fight broke out between Marlowe and Frizer over the bill, and Marlowe was stabbed in the forehead and killed. Marlowe was only 29 years old at the time.

Conspiracy theories have abounded since, with Marlowe’s atheism and alleged spy activities at the heart of the murder plots, but the real reason for Marlowe’s death is still debated.