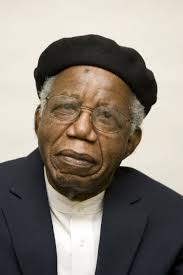 Chinua Achebe was a Nigerian novelist, poet, professor, and critic. His first novel Things Fall Apart (1958) was considered his magnum opus, and is the most widely read book in modern African literature.

Albert Chinualumogu Achebe was born in the Igbo (formerly spelled Ibo) town of Ogidi in eastern Nigeria on November 16, 1930, the fifth child of Isaiah Okafor Achebe and Janet Iloegbunam Achebe. His father was an instructor in Christian catechism for the Church Missionary Society. Nigeria was a British colony during Achebe’s early years, and educated English-speaking families like the Achebes occupied a privileged position in the Nigerian power structure. His parents even named him Albert, after Prince Albert, the husband of Queen Victoria of Great Britain. (Achebe himself chose his Igbo name when he was in college.)

Achebe attended the Church Missionary Society’s school where the primary language of instruction for the first two years was Igbo. At about eight, he began learning English. His relatively late introduction to English allowed Achebe to develop a sense of cultural pride and an appreciation of his native tongue — values that may not have been cultivated had he been raised and taught exclusively in English. Achebe’s home fostered his understanding of both cultures: He read books in English in his father’s library, and he spent hours listening to his mother and sister tell traditional Igbo stories.

At fourteen, Achebe was selected to attend the Government College in Umuahia, the equivalent of a university preparatory school and considered the best in West Africa. Achebe excelled at his studies, and after graduating at eighteen, he was accepted to study medicine at the new University College at Ibadan, a member college of London University at the time. The demand for educated Nigerians in the government was heightened because Nigeria was preparing for self-rule and independence. Only with a college degree was a Nigerian likely to enter the higher ranks of the civil service.

The growing nationalism in Nigeria was not lost on Achebe. At the university, he dropped his English name “Albert” in favor of the Igbo name “Chinua,” short for Chinualumogo. Just as Igbo names in Things Fall Apart have literal meanings, Chinualumogo is translated as “My spirit come fight for me.”

At University College, Achebe switched his studies to liberal arts, including history, religion, and English. His first published stories appeared in the student publication the University Herald. These stories have been reprinted in the collection Girls at War and Other Stories, which was published in 1972. Of his student writings, only a few are significantly relative to his more mature works; short stories such as “Marriage is a Private Affair” and “Dead Man’s Path” explore the conflicts that arise when Western culture meets African society.

After graduating with a Bachelor of Arts degree in 1953, Achebe joined the Nigerian Broadcasting Corporation as a producer of radio talks. In 1956, he went to London to attend the British Broadcasting Corporation (BBC) Staff School. While in London, he submitted the manuscript for Things Fall Apart to a publisher, with the encouragement and support of one of his BBC instructors, a writer and literary critic. The novel was published in 1958 by Heinemann, a publishing firm that began a long relationship with Achebe and his work. Fame came almost instantly. Achebe has said that he never experienced the life of a struggling writer.

Upon returning to Nigeria, Achebe rose rapidly within the Nigerian Broadcasting Corporation. As founder and director of the Voice of Nigeria in 1961, Achebe and his colleagues aimed at developing more national identity and unity through radio programs that highlighted Nigerian affairs and culture.

Turmoil in Nigeria from 1966 to 1972 was matched by turmoil for Achebe. In 1966, young Igbo officers in the Nigerian army staged a coup d’ètat. Six months later, another coup by non-Igbo officers overthrew the Igbo-led government. The new government targeted Achebe for persecution, knowing that his views were unsympathetic to the new regime. Achebe fled to Nsukka in eastern Nigeria, which is predominantly Igbo-speaking, and he became a senior research fellow at the University of Nigeria, Nsukka. In 1967, the eastern part of Nigeria declared independence as the nation of Biafra. This incident triggered thirty months of civil war that ended only when Biafra was defeated. Achebe then fled to Europe and America, where he wrote and talked about Biafran affairs.

Like many other African writers, Achebe believes that artistic and literary works must deal primarily with the problems of society. He has said that “art is, and always was, at the service of man” rather than an end in itself, accountable to no one. He believes that “any good story, any good novel, should have a message, should have a purpose.”

Continuing his relationship with Heinemann, Achebe published four other novels: No Longer at Ease (the 1960 sequel to Things Fall Apart), Arrow of God (1964), A Man of the People (1966), and Anthills of the Savannah (1987). He also wrote and published several children’s books that express his basic views in forms and language understandable to young readers.

In his later books, Achebe confronts the problems faced by Nigeria and other newly independent African nations. He blames the nation’s problems on the lack of leadership in Nigeria since its independence. In 1983, he published The Trouble with Nigeria, a critique of corrupt politicians in his country. Achebe has also published two collections of short stories and three collections of essays. He is the founding editor of Heinemann’s African Writers series; the founder and publisher of Uwa Ndi Igbo: A Bilingual Journal of Igbo Life and Arts; and the editor of the magazine Okike, Nigeria’s leading journal of new writing.

Achebe received many awards from academic and cultural institutions around the world. In 1959, he won the Margaret Wong Memorial Prize for Things Fall Apart. The following year, after the publication of its sequel, No Longer At Ease, he was awarded the Nigerian National Trophy for Literature. His book of poetry, Christmas in Biafra, written during the Nigerian civil war, won the first Commonwealth Poetry Prize in 1972. More than twenty universities in Great Britain, Canada, Nigeria, and the United States have awarded Achebe honorary degrees.