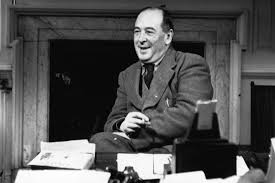 Clive Staples Lewis was born in Belfast, Ireland, on 29 November 1898.

Lewis’s mother died when he was 10, and he went on to receive his pre-college education at boarding schools and from a tutor. During WWI, he served with the British army and was sent home after being wounded by shrapnel. He then chose to live as a surrogate son with Janie Moore, the mother of a friend of Lewis’s who was killed in the war.

Lewis graduated from Oxford University with a focus on literature and classic philosophy, and in 1925 was awarded a fellowship teaching position at Magdalen College, which was part of the university. There, he also joined the group known as The Inklings, an informal collective of writers and intellectuals who counted among their members Lewis’ brother, Warren Lewis, and J.R.R. Tolkien. It was through conversations with group members that Lewis found himself re-embracing Christianity after having become disillusioned with the faith as a youth. He would go on to become renowned for his rich apologist texts, where he explained his spiritual beliefs via platforms of logic and philosophy.

Lewis began publishing work in the mid-1920s with his first book, the satirical Dymer (1926). After penning other titles—including The Allegory of Love (1936), for which he won the Hawthornden Prize—he released in 1938 his first sci-fi work, Out of the Silent Planet, the first of a trilogy which dealt sub-textually with concepts of sin and desire. Later, during World War II, Lewis gave highly popular radio broadcasts on Christianity which won many converts; his speeches were collected in the work Mere Christianity.

During the ’50s, Lewis started to publish the seven books that would comprise The Chronicles of Narnia children’s series, with The Lion, The Witch and the Wardrobe (1950) being the first release. The story focused on four siblings who, during wartime, walk through an armoire to enter the magical world of Narnia, a land resplendent with mythical creatures and talking animals. Different parts of the series represented a variety of Biblical themes; one prominent character is Aslan, a lion and the ruler of Narnia, who has also been interpreted as a Jesus Christ figure. (Lewis would assert that his Narnia stories weren’t a direct allegory to the real world.)

In 1954, Lewis joined the faculty of Cambridge University as a literature professor, and in 1956 he married an American English teacher, Joy Gresham, with whom he had been in correspondence. Lewis was full of joy during the years of their marriage, though Gresham died of cancer in 1960. Lewis grieved deeply for his wife and shared his thoughts in the book A Grief Observed, using a pen name.

In 1963, Lewis resigned from his Cambridge position after experiencing heart trouble. He died on November 22, 1963, in Headington, Oxford.

Lewis was a prolific author of fiction and nonfiction who wrote dozens of books over the course of his career. His faith-based arguments as seen in texts like The Great Divorce (1946) and Miracles (1947) are held in high regard by many theologians, scholars and general readers. Lewis also continued his love affair with classic mythology and narratives during his later years: His book Till We Have Faces: A Myth Retold (1956) featured the story of Psyche and Cupid. He also penned an autobiography, Surprised by Joy: The Shape of My Early Life (1955).

Lewis’s landmark series, The Chronicles of Narnia, has seen a number of on-screen iterations, including a cartoon version of The Lion, The Witch and the Wardrobe that was released in 1979 and a 1989 BBC film series. Additionally, in 2005, a big-screen adaptation of The Lion, The Witch and the Wardrobe hit movie theaters, starring Tilda Swinton as the witch Jadis and Liam Neeson as the voice of Aslan. Two more Narnia films have been brought to theaters as well: Prince Caspian (2008) and The Voyage of the Dawn Treader (2010). Movie version of The Silver Chair is reportedly in the works. Lewis’s relationship with his wife Joy has also been depicted in Shadowlands, presented as a play and two films; one of the film versions was directed by Richard Attenborough and starred Anthony Hopkins as Lewis.