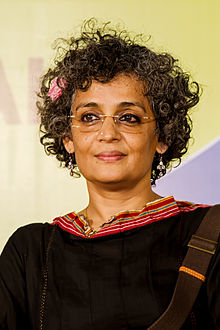 Arundhati Roy is an Indian author who is best known for her novel The God of Small Things, which won the Man Booker Prize for Fiction in 1997.

She spent her childhood in Aymanam, in Kerala, schooling in Corpus Christi. She left Kerala for Delhi at age 16, and embarked on a homeless lifestyle, staying in a small hut with a tin roof within the walls of Delhi’s Feroz Shah Kotla and making a living selling empty bottles. She then proceeded to study architecture at the Delhi School of Architecture, where she met her first husband, the architect Gerard Da Cunha.

The God of Small Things is the only novel written by Roy. Since winning the Booker Prize, she has concentrated her writing on political issues. These include the Narmada Dam project, India’s Nuclear Weapons, corrupt power company Enron’s activities in India. She is a figure-head of the anti-globalization/alter-globalization movement and a vehement critic of neo-imperialism.

In response to India’s testing of nuclear weapons in Pokhran, Rajasthan, Roy wrote The End of Imagination, a critique of the Indian government’s nuclear policies. It was published in her collection The Cost of Living, in which she also crusaded against India’s massive hydroelectric dam projects in the central and western states of Maharashtra, Madhya Pradesh and Gujarat. She has since devoted herself solely to nonfiction and politics, publishing two more collections of essays as well as working for social causes.

Roy was awarded the Sydney Peace Prize in May 2004 for her work in social campaigns and advocacy of non-violence.

In June 2005 she took part in the World Tribunal on Iraq. In January 2006 she was awarded the Sahitya Akademi award for her collection of essays, ‘The Algebra of Infinite Justice’, but declined to accept it.