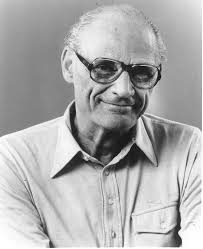 Arthur Miller was a prolific American playwright, essayist, and prominent figure in twentieth-century American theatre. Among his most popular plays are All My Sons, Death of a Salesman, The Crucible and A View from the Bridge.

Arthur Asher Miller was born on October 17, 1915, in Harlem, in the New York City borough of Manhattan, the second of three children of Augusta (Barnett) and Isidore Miller.

After graduating high school, Miller worked a few odd jobs to save enough money to attend the University of Michigan. While in college, he wrote for the student paper and completed his first play, No Villain. He also took courses with the much-loved playwright professor Kenneth Rowe, a man who taught his students how to construct a play in order to achieve an intended effect. Inspired by Rowe’s approach, Miller moved back east to begin his career.

Things started out a bit rocky: His 1940 play, The Man Who Had All the Luck, garnered precisely the antithesis of its title, closing after just four performances and a stack of woeful reviews. Six years later, however, All My Sons achieved success on Broadway, and earned him his first Tony Award (best author). Working in the small studio that he built in Roxbury, Connecticut, Miller wrote the first act of Death of Salesman in less than a day. It opened on February 10, 1949 at the Morosco Theatre, and was adored by nearly everyone. Salesman won him the triple crown of theatrical artistry: the Pulitzer Prize, the New York Drama Critics’ Circle Award and a Tony.

In 1956, Miller left his first wife, Mary Slattery. Shortly thereafter, he married famed actress Marilyn Monroe. Later that year, the House of Un-American Activities Committee refused to renew Miller’s passport, and called him in to appear before the committee—his play, The Crucible, a dramatization of the Salem witch trials of 1692 and an allegory of McCarthyism, was the foremost reason for their strong-armed summons. However, Miller refused to comply with the committee’s demands to “out” people who had been active in certain political activities.

In 1961, Monroe starred in The Misfits, a film for which Miller supplied the screenplay. Around the same time, Monroe and Miller divorced.

Within several months, Miller married Austrian-born photographer Inge Morath. The couple had two children, Rebecca and Daniel. Miller insisted that their son, Daniel, who was born with down syndrome, be completely excluded from the family’s personal life. Miller’s son-in-law, actor Daniel Day-Lewis, visited his wife’s brother frequently, and eventually persuaded Miller to reunite with his adult son.

In his final years, Miller’s work continued to grapple with the weightiest of societal and personal matters. His last play of note was The Price (1968), a piece about family dynamics. In 2002, Miller’s third wife, Inges, died. The famed playwright promptly became engaged to 34-year-old minimalist painter Agnes Barley.

Miller died of heart failure after a battle against cancer, pneumonia and congestive heart disease at his home in Roxbury, Connecticut. He had been in hospice care at his sister’s apartment in New York since his release from hospital the previous month. He died on the evening of February 10, 2005 (the 56th anniversary of the Broadway debut of Death of a Salesman), aged 89, surrounded by Barley, family and friends. He is interred at Roxbury Center Cemetery in Roxbury.