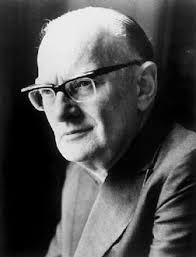 Sir Arthur Charles Clarke was born 16 December 1917 in the English coastal town of Minehead, in Somerset.  As a boy, Clarke enjoyed stargazing and enthusiastically read old American science fiction magazines (magazines which made their way to England as ballast in ships). After secondary school, he was unable to afford university and consequently acquired a job as an auditor in the pensions section of the Board of Education.

During World War II, he served in the Royal Air Force (RAF) as a radar specialist and was involved in the early warning radar defense system which contributed to the Royal Air Force’s success during the Battle of Britain. After the war, he obtained a first class degree in mathematics and physics at King’s College, London.

His most important contribution may be the conception that geostationary satellites would be ideal telecommunications relays. He proposed this concept in a scientific paper titled “Can Rocket Stations Give Worldwide Radio Coverage?”, published in Wireless World in October 1945. The geostationary orbit is now known as the Clarke orbit in his honor.

In the early 1940s, while he was in the RAF, Clarke began selling his science fiction stories to magazines. Clarke worked briefly as Assistant Editor of Science Abstracts before devoting himself to writing full-time from 1951. He has been chairman of the British Interplanetary Society and a member of the Underwater Explorers Club.

He has lived in Colombo, Sri Lanka, since 1956. This inspired the locale for his novel, The Fountains Of Paradise, in which he describes a space elevator. This, he figures, will ultimately be his legacy, more so than geostationary satellites, once space elevators make space shuttles obsolete.

In 1988 he was diagnosed with post-polio syndrome and has since become wheel-chair bound.

His knighthood was first announced in 1998, but then the British tabloid The Sunday Mirror published serious accusations against him, and the award was delayed pending investigation. By 2000 it was clear that the story had been planted maliciously. Clarke was then awarded the title of Knight Bachelor at a ceremony in Colombo (his health did not allow him to travel to London to receive the honour personally from the Queen).