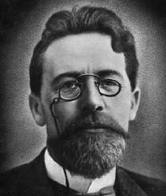 Anton Chekhov was a Russian physician, playwright and author who is considered to be among the greatest writers of short stories in history.

Anton Pavlovich Chekhov (Антон Павлович Чехов) was born on 29 January 1860, the third of six surviving children, in Taganrog, a port on the Sea of Azov in southern Russia.

His father, Pavel, was a grocer with frequent money troubles; his mother, Yevgeniya, shared her love of storytelling with Chekhov and his five siblings.

When Pavel’s business failed in 1875, he took the family to Moscow to look for other work while Chekhov remained in Taganrog until he finished his studies. Chekhov finally joined his family in Moscow in 1879 and enrolled at medical school. With his father still struggling financially, Chekhov supported the family with his freelance writing, producing hundreds of short comic pieces under a pen name for local magazines.

During the mid-1880s, Chekhov practiced as a physician and began to publish serious works of fiction under his own name. His pieces appeared in the newspaper New Times and then as part of collections such as Motley Stories (1886). His story “The Steppe” was an important success, earning its author the Pushkin Prize in 1888. Like most of Chekhov’s early work, it showed the influence of the major Russian realists of the 19th century, such as Leo Tolstoy and Fyodor Dostoyevsky.

Chekhov also wrote works for the theater during this period. His earliest plays were short farces; however, he soon developed his signature style, which was a unique mix of comedy and tragedy. Plays such as Ivanov (1887) and The Wood Demon (1889) told stories about educated men of the upper classes coping with debt, disease and inevitable disappointment in life.

Chekhov wrote many of his greatest works from the 1890s through the last few years of his life. In his short stories of that period, including “Ward No. 6” and “The Lady with the Dog,” he revealed a profound understanding of human nature and the ways in which ordinary events can carry deeper meaning.

In his plays of these years, Chekhov concentrated primarily on mood and characters, showing that they could be more important than the plots. Not much seems to happen to his lonely, often desperate characters, but their inner conflicts take on great significance. Their stories are very specific, painting a picture of pre-revolutionary Russian society, yet timeless.

From the late 1890s onward, Chekhov collaborated with Constantin Stanislavski and the Moscow Art Theater on productions of his plays, including his masterpieces The Seagull (1895), Uncle Vanya (1897), The Three Sisters (1901) and The Cherry Orchard (1904).

In 1901, Chekhov married Olga Knipper, an actress from the Moscow Art Theatre. However, by this point his health was in decline due to the tuberculosis that had affected him since his youth. While staying at a health resort in Badenweiler, Germany, he died in the early hours of July 15, 1904, at the age of 44.