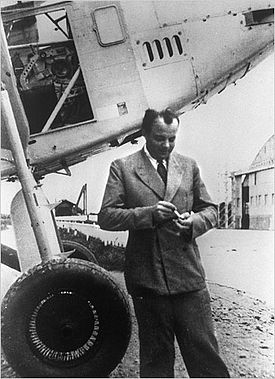 Antoine de Saint-Exupry was a French aristocrat, writer, poet, and pioneering aviator. He became a laureate of several of France’s highest literary awards and also won the U.S. National Book Award. He is best remembered for his novella The Little Prince

Antoine de Saint-Exupéry was born in Lyons on June 29, 1900, France. His father died in 1904, thus his mother moved with her children to Le Mans in 1909. He spent his childhood years at the castle of Saint-Maurice-de-Rémens.

He acquired his early education at Jesuit schools in Montgré and Le Mans, and a Catholic boarding school in Switzerland (1915-1917). Much to his dismay, he failed his final examination at a university preparatory school, so he enrolled himself at the École des Beaux-Arts to study architecture. He tried to join the Navy, but couldn’t enter. In 1921, he started off as a mechanic and joined the French Air Force in Strasbourg. He had flown, with a pilot, for the first time in 1912. However, when his fiancé’s family objected, he settled in Paris where he took an office job and started to write. His engagement broke off some time later.

Saint-Exupéry’s first tale, ‘L’Aviateur’ was published in 1926 in the literary magazine Le Navire d’argent. His career took off when in 1928; he became the director of the remote Cap Juby Airfield in Rio de Oro, Sahara. During this period, the house he lived in was a wooden ram-shackle and he slept on a thin straw mattress. A point in his life came when he had completely secluded himself. This was when he wrote The Little Prince and The Wisdom of the Sands which showed his love for the desert. His first novel, Southern Mail celebrated the courage of the early pilots, flying at the limits of safety, to speed on the mail and win a commercial advantage over rail and steamship rivals. Another story was written which described the author’s failed relationship with his fiancé.

In 1929, Saint-Exupéry flew to South America, where he was made the director of the Aeroposta Argentina Company. This experience gave the basis for his second novel, Night Flight which became an international bestseller. It won the Prix Femina. The story describes Rivière, the hard-bitten airport chief who has by gone into retirement and has accepted the work of flying the mail as his destiny.

Saint-Exupéry married a widow, Consuelo Gómez Carillo in 1931. The marriage did not last for long. Consuelo felt neglected by her husband, who didn’t have the time to pay much attention to her needs. There were also rumors of him being engaged in affairs with other women. After being convinced by a friend, he wrote a book about Pilots’ confessions, Wind, Sand and Stars, which appeared in 1939 and won the French Academy’s 1939 Grand Prix du Roman and the National Book Award in the United States. He disappeared on a reconnaissance flight over the Mediterranean and France in July 1944 and is believed to have died at that time.