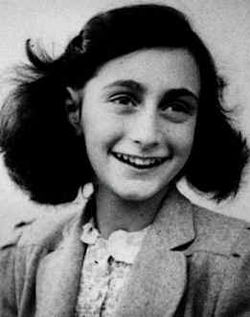 Anne Frank was a German-born diarist and writer. She is one of the most discussed Jewish victims of the Holocaust. Her wartime diary The Diary of a Young Girl has been the basis for several plays and films.

Annelies Marie “Anne” Frank was born on 12 June 1929 in the German town of Frankfurt am Main.

She was their second daughter while Margot Frank was her elder sister. Her family was of Jewish origin and they were liberal in their outlook. Family had an extensive collection of books in the library. Both the parents had one thing in common; both encouraged their children to read.

On 13th March 1933, the anti-Jewish National Socialist Party led by Hitler came to power. The Jewish Frank family feared attack on them and their children if they remained in Germany. Perceiving their children’s future prospect, the same year, Edith along her children moved to Aachen, to stay with her mother, Rosa Holländer for better security and safety of her children. While father Otto Frank remained in Frankfurt after receiving an offer to start a company in Amsterdam. He shifted base there to organise a business and arrange for accommodations in his family. The Frank family was among the 300,000 Jew families who fled Germany between the period 1933 and 1939. In 1940 when Netherland was invaded by Germany, it was no more a safe heaven for the Frank family.

Meanwhile, Otto Frank was working with the Opekta Works in Amsterdam and lived in an apartment on the Merwedeplein (Merwede Square) in Amsterdam. In February 1934, Edith along with her children came back to Amsterdam and enrolled Margot in a public school and later Anne was admitted to a Montessori school. While Margot showed aptitude in arithmetic, Anne harbored more interest in literature. While Margot was well-mannered, reserved, and studious, Anne was more of an outspoken, energetic and extrovert person.

In 1938, Otto Frank started up a new company called Pectacon, which dealt in wholesale of herbs, salts and various spices, used for making sausages. He then employed Hermann van Pels as an advisor on spices. He was of Jewish origin and fled from Osnabrück in Germany with his family. In 1939, Edith’s mother started living with the Franks, and remained with them until her death in January 1942.
In May 1940, when Germany invaded Netherlands, the Jewish people were subjected to racial discriminatory laws. This law imposed a restriction on all the Jewish children who were allowed to study in only Jewish schools. Though both the sisters were doing really well in their studies, the same rule was applicable in the case of Frank sisters, who were later enrolled at the Jewish Lyceum.

In April 1941, Otto Frank, in order to hide his Jewish origin action, transferred the shares of Pectacon to Johannes Kleiman and resigned from the position of director. The company and its assets were liquidated and transferred to Gies and Company, headed by Jan Gies; he followed the same steps to save his company Opekta in December 1941. This way he could earn a moderate income and have a steady income flow.

Anne as Writer
On July 6, 1942 the family went into hiding in a secret annex. They left a note saying that they were going to Switzerland in order to mislead the Nazi’s. Though initially Anne saw hiding as an adventurous and exciting activity but later she got restless and took to writing for the next two years. She wrote in her personal diary which she got as a gift on her 13th birthday. In her diary, she wrote her daily experience during her days in the hiding. She kept the diary a secret and didn’t disclose the contents of it to anyone in the family. In her secret diary, she had expressed her desire to become a journalist as written on Wednesday, 5 April 1944. She used to write regularly until her final entry on August 1, 1944.

The Diary of a Young Girl
The secret diary of Anne Frank was later retrieved and found by Otto Frank, the only survivor in the Frank family. It was first published it in Netherlands by the name Het Achterhuis in 1947. After receiving critical acclaim on publication, he attempted to publish it in Germany and France in 1950 but it was rejected by many publishers. It was later published it in the United Kingdom in 1952. The first American edition was published in 1952 which was titled Anne Frank: The Diary of a Young Girl.

Arrest
On 4th august, 1944, Frank family’s hideout in the Archterhuis was raided by the German Security Police (Grüne Polizei). Anne Frank, along with eight others, were then arrested from their hiding and taken to the Punishment Barracks for hardship. It was followed by long journeys to the concentration camps in Holland, Poland and Germany. The only survivor among them was Otto Frank.

Death
Anne Frank died of typhus at the age of 15 in March 1945 in Bergen-Belsen concentration camp, Lower Saxony, Nazi Germany.