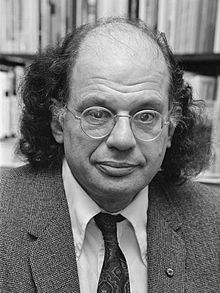 Allen Ginsberg  was an American poet and one of the leading figures of both the Beat Generation of the 1950s and the counterculture that soon would follow.

Irwin Allen Ginsberg was born on June 3, 1926 in Newark, New Jersey. His parents, Louis and Naomi Ginsberg, were Jewish members of the New York literary counter-culture of the 1920s. Throughout his childhood, Ginsberg remained concerned for his mother’s mental health as a nudist. Living with his mother developed in Allen an enormous amount of tolerance and empathy for neurosis, psychosis and madness.

He graduated from high school in 1939. Ginsberg was accepted to Columbia University in the 1940s. It was at Columbia that he met and made close friendships with William S. Burroughs, Neal Cassady, and Jack Kerouac, all of whom later became leading figures of the Beat Movement. Also around this time, Ginsberg had what he called the Blake Vision. This was an auditory hallucination of William Blake reading his poems. In the visions, William Blake read poems such as Ah Sunflower, The Sick Rose, and Little Girl Lost. According to Ginsberg, the visions played an important role in developing his comprehension of the universe which in turn affected his fundamental beliefs about life and work. While Ginsberg claimed he did not make use of any drugs, he later admitted to using drugs in an attempt to recapture the feelings derived from the visions.

Moving to San Francisco in 1954, Ginsberg was introduced to many important poetic figures by his mentor William Carlos Williams. Some of these personalities included Kenneth Rexroth and Michael McClure. Rexroth requested Ginsberg to take over the responsibility of curating a reading for the newly established 6 Gallery. The reading took place on October 7, 1955. The event is known to be the birth of the Beat Generation. It was also the first public reading of Ginsberg’s poem Howl and gained Ginsberg worldwide recognition.

In 1956, Ginsberg published his book, Howl and Other Poems. It was published by City Lights Bookstore. Shortly after its publication, the book was banned for obscenity. However, the book came over censorship trials and Howl went on to become one of the most widely read poems in the world of the century. It was translated into more than 22 languages.

Some more significant publications by Allen Ginsberg include Kaddish and Other Poems (1961), Planet News (1968), and The Fall of America: Poems of These States (1973), which won the National Book Award.

During the 1960s and 1970s, Allen Ginsberg gained immense popularity as one of the leading icons of the Beats. Also during this time, he studied under the supervision of gurus and Zen masters. He became involved in numerous political activities, including protests against the Vietnam War. Ginsberg spoke freely about issues of his concern such as free speech and gay rights. In addition to receiving the Chevalier des Arts et des Lettres from the French Minister of Culture, Ginsberg also co-founded and directed the Jack Kerouac School of Disembodied Poetics at the Naropa Institute in Colorado. In his later years, Ginsberg became a Distinguished Professor at Brooklyn College.

On April 5, 1997, in New York City, he died from complications of hepatitis.