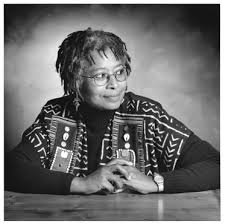 Alice Malsenior Walker was born on February 9, 1944 in Putnam County, Georgia. She is an accomplished American poet, novelist, and activist. Walker was the eighth and youngest child of Minnie Tallulah Grant Walker and Willie Lee Walker. Her father was a poor sharecropper who once remarked that Alice was “wonderful at math but a terrible farmer.” In the summer of 1952, Walker was blinded in her right eye by a BB gun pellet while playing with her brother. Alice grew up in an environment rife with racism and poverty, which, along with her passion for gender issues, remains a large part of her narratives.

To help send her to college, Walker’s mother worked eleven-hour days as a maid for a meager seventeen dollars a week. (White) Walker flourished in an academic environment. After two years at Spelman College, she received a scholarship to Sarah Lawrence College in New York. She became one of a chosen few young black students to attend the prestigious school. Walker was involved with many civil rights demonstrations, and in 1962 she was invited to the home of Dr. Martin Luther King Jr.

After graduating in 1965, Walker became a social worker and teacher, while remaining heavily invested and involved in the Civil Rights Movement. As a writer in residence at Jackson State College and Tougaloo College, she taught poetry while working on her own poetry and fiction. She contributed to groundbreaking feminist Ms. magazine in the late 60s, writing a piece about the unappreciated work of African-American author Zora Neale Hurston. Her first novel, The Third Life of Grange Copeland was published in 1970. Meridian, Walker’s second novel was published six years later.

She wrote the critically acclaimed novel The Color Purple (1982) for which she won the National Book Award and the Pulitzer Prize for Fiction. The novel was adapted into an acclaimed film directed by Steven Spielberg in 1985, starring Whoopi Goldberg as protagonist Celie Harris. The novel and film trace Celie’s life in the early 20th century American south, and her struggles with poverty, racism, sexism and violence, and the female friendship that empowers her.

Walker has proved time and time again to be a versatile writer. In 2004, she published Now Is the Time to Open Your Heart. Two years later, in 2006, she published a collection of essays, We Are the Ones We Have Been Waiting For: Light in a Time of Darkness, and the well-received picture book There Is a Flower at the Tip of My Nose Smelling Me.Continuing her work as a political activist, Walker also wrote about her experiences with the group Women for Women International in 2010’sOvercoming Speechlessness: A Poet Encounters the Horror in Rwanda, Eastern Congo and Palestine/Israel. She published another poetry collection,Hard Times Require Furious Dancing, that same year.

After more than four decades as a writer, Alice Walker shows no signs of slowing down. In 2012, she released The Chicken Chronicles; in this latest memoir, she ruminates on caring for her flock of chickens. Following the release of The Chicken Chronicles, she began working on The Cushion in the Road, a collection of mediations on a variety of subjects slated to be published in 2013.

Personal LifeWalker married activist Melvyn Leventhal in 1967. The couple had one daughter, Rebecca Walker, before divorcing in 1976.
Rate article
Add a comment Cancel reply
Recent Posts
Popular books
You may also like