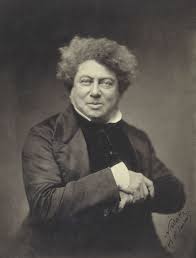 Alexandre Dumas was a French writer, the author of The Three Musketeers and The Count of Monte Cristo

Where was Alexandre Dumas born

Dumas Davy de la Pailleterie (later known as Alexandre Dumas) was born in 1802 in Villers-Cotterêtsin the department of Aisne, in Picardy, France.

His father was somewhat of an adventurer-soldier, a mulatto, and was not a favorite of Napoleon because of his staunch republicanism. Therefore, on his father’s death in 1806, when Alexandre was only four, the family was left in rather severe financial straits.

After her husband’s death, Marie Louise Labouret worked hard to provide an education for her son. Dumas attended Abbé Grégoire’s school before dropping out to take a job assisting a local notary.

In 1822, Dumas moved to Paris and immersed himself in literature. He worked as a scribe for the duc d’Orléans (later named King Louis Philippe) during the 1830 revolution. He began writing plays, both comedies and dramas. Dumas’s Romantic style—often compared to that of his contemporary and rival, Victor Hugo—proved to be exceptionally popular.

Dumas was a prolific writer of essays, short stories and novels, as well as plays and travelogues. He achieved widespread success with the novels The Count of Monte Cristo and The Three Musketeers, initially published as serials. These novels made Dumas a household name in France and a popular author throughout much of Europe.

With the money he earned from publishing his novels, Dumas purchased land and built the Château de Monte Cristo in Port Marly, Yvelines, France. This home (which is now a museum) was intended to be a sanctuary for the author, and he spent much of his time writing and entertaining there before debt overtook him, forcing him to sell the property. He fled to Belgium in 1851, and later to Russia, to evade creditors. Dumas continued to publish books, including travel books on Russia, during his period of exile.

Dumas had a son, also named Alexandre, with Marie Laure Catherine Labay. His son followed in his literary footsteps. In 1840, Dumas married actress Ida Ferrier, but continued his affairs with other women. He had at least one daughter, Marie Alexandrine, out of wedlock, and dated much younger women in his old age.

Dumas died on December 5, 1870, at his son’s home in Puys, France. He was buried in the cemetery of Villers-Cotterêts. In 2002, his body was moved to the Panthéon in Paris, where Dumas rests among such other French literary greats as Émile Zola, Victor Hugo and Jean-Jacques Rousseau.