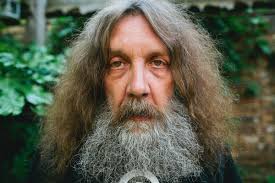 Alan Moore is an English writer primarily known for his work in comic books including Watchmen, V for Vendetta, and From Hell. Frequently described as the best graphic novel writer in history, he has been called “one of the most important British writers of the last fifty years”. He has occasionally used such pseudonyms as Curt Vile, Jill de Ray, Translucia Baboon and The Original Writer.

Born on November 18, 1953 in Northampton, England, Alan Oswald Moore led a marred childhood growing up in poverty and a neighborhood lacking basic facilities. His father, Ernest Moore, was a brewery worker and mother, Sylvia Doreen, a printer. The greatest childhood influence that cast a lasting impression on Alan Moore was his highly religious and superstitious maternal grandmother who lived with them. Alan loved reading and began borrowing books from the local library at the age of five. Moore attended Spring Lane Primary School and was later accepted to Northampton Primary School. Here, he was introduced to middle class and better educated people. Not able to cope with the change, Moore went from being a top class student to a low grading one, and as a result he lost interest in academic studies.

Moore began publishing his poetry and essays in various fanzines during the late 1960s and eventually set up his own fanzine named Embryo. He continued to live with his parents for some time and worked on different jobs, including cleaning toilets. In 1971, Moore met Phyllis, whom he married some time later and had two daughters, Amber and Leah. Also, during the 1970s, Moore became a cartoonist. His work began appearing in publications such as Sounds and NME under the pseudonym Curt Vile, Jill De Ray, and Translucia Baboon. He moved on to contribute to more significant publications including Doctor Who Weekly and 2000 AD. Also during this time Moore began creating several popular series such as The Ballad of Halo Jones and D.R. & Quinch.

Alan gained life changing recognition when he started writing for the British anthology magazine, Warrior. He worked on his most important series, Miracleman and V for Vendetta. He was awarded the British Eagle for Best Comics Writer awards for both these works in 1982 and 1983. His first American series was Saga of the Swamp Thing. Moore’s writing set new styles and standards in the comic writing genre. This influence can still be seen in the works of many comic writers. His 1986 work, Watchmen redefined the comic book medium, changing the tone of comics to date. Many readers and critics consider Watchmen to be the best comic ever produced.

By the end of the 1980s, Alan Moore was publishing his own graphic novels while also contributing to Batman and Superman stories. Despite disagreements with mainstream comic publishers, Moore still continues to sell a lot and remain on the top. Also towards the late 1980s, Moore set up his own publishing imprint called Mad Love Publishing. More recently, Alan Moore has produced another imprint called America’s Best Comics and series including The League of Extraordinary Gentlemen, Promethea, Tom Strong’s Terrific Tales, Tomorrow Stories and Top Ten.