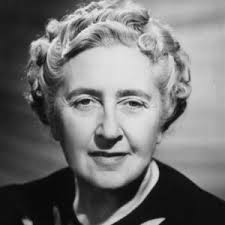 Agatha Miller was born in Torquay,England on September 15th, 1890.In 1914 she married Colonel Archibald Christie,an aviator in the Royal Flying Corps. The couple had one daughter, Rosalind,before their divorce in 1928.

In a writing career that spanned more than half a century, Agatha Christie wrote 79 novels and short story collections. She also wrote over a dozen plays including The Mousetrap, which opened in London on November 25th, 1952, and is now the longest continuously running play in theatrical history.

Christie’s first novel, The mysterious Affair at Styles (1920), was also the first to feature her eccentric Belgian detective Hercule Poirot. Surely one of the most famous fictional creations of all times , Poirot’s ‘little grey cells’ triumphed over devious criminals in 33 novels and many dozens of short stories. Christie’s last published novel, Sleeping Murder (1976), featured her other world-famous sleuth, the shrewdly inquisitive Miss Jane Marple of St. Mary Mead. Miss Marple appeared in twelve novels, beginning with The Murder at the Vicarage in 1930.

Both Hercule Poirot and Miss Marple have been widely dramatized in feature films and made-for-TV movies. Murder on the Orient Express (1974), Witness for the Prosecution (1957), And Then There Were None (1945), and Death on the Nile (1978) are a few of the successful films based on her works.

Agatha Christie also wrote six romantic novels under the pseudonym Mary Westmacott. She wrote notification as well – Four books including an autobiography and an entertaining account of the many archeological expeditions she shared with her second husband, Sir Max Mallowan. In 1971, she achieved her country’s highest honor when she received the Order of Dame Commander of the British Empire. Agatha Christie died on January 12th, 1976.

David Sedaris short biography
David Sedaris is an American humorist, comedian, author
0279
This website uses cookies to improve user experience. By continuing to use the site, you consent to the use of cookies.